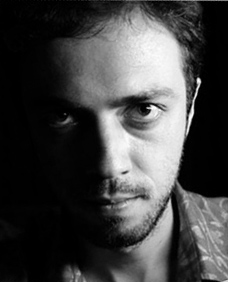 As Spectrasonics Director of Design, Tolga Gurpinar is a quintessential example of a creative artist/designer in the 21st century.

During his early childhood years in Istanbul, Tolga was inspired by the natural and textural diversity of the land and the Black Sea stretching north of the city. Electronics was another appealing mystery to him. So he spent much of his time drawing all sorts of electronic gadgets - attracted to devices like microphones, tape machines, cathode ray tubes [yes, he once wanted a cathode tube as a birthday present :)], spotlights, cameras, etc... which all seemed linked to show business somehow! Little did this boy know that he would end up still playing with gadgets in the heart of Hollywood someday!

Ever curious, Music was another mystery - later evolving into a passion for electronic music and synthesizers - which ultimately connected him via the dawning Internet to collaborate with Eric Persing on Spectrasonics instruments.

Tolga has released 4 solo albums of original electronic music under the moniker "iloyd", which was originally a character from an electronic album he created for children. He also produced the surprise college novelty hit "Poshet" in 2009. Tolga's original music has been used extensively on many shows including: America's Next Top Model, Biography, VH1, The History Channel, Animal Planet, The Discovery Channel, The Oprah Winfrey Show, National Geographic, Flight Plan, Bravo, MSNBC, The World Cup, CMT, Along Came Polly, MTV, The Food Network, The Weather Channel, The Travel Channel and Killer Bunny Enterprises.