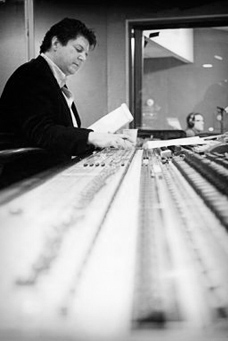 Scott Frankfurt is a critically acclaimed producer, arranger, composer, synthesist, and sound designer. A long-time member of the Spectrasonics sound development team, Scott is a frequent contributor with a signature style. His outstanding sound design work is featured on many Spectrasonics products.

After studying classical piano as a child, Scott discovered a passion for the drums at age 13. While working in music retail, Scott was also exposed to earliest days of drum machine technology. Ultimately, his love for songwriting led him back to the keyboard, where his fascination with synthesizers grew into a parallel career as a Sound Designer, where he applied his skills for Emu, Yamaha, Korg, and Ensoniq - developing the sounds and demos used in professional keyboards throughout the world. His contributions at Ensoniq were realized in several hit products, including the EPS and ASR-10. His sampling, voicing and demo work helped launch several key KORG products including the Trinity, Triton and Karma.

Scott and his wife Sharon own and operate "Scott Frankfurt Studio", a state of the art facility in Woodland Hills - with their two dogs "Boaz" and "Ella Bleu".