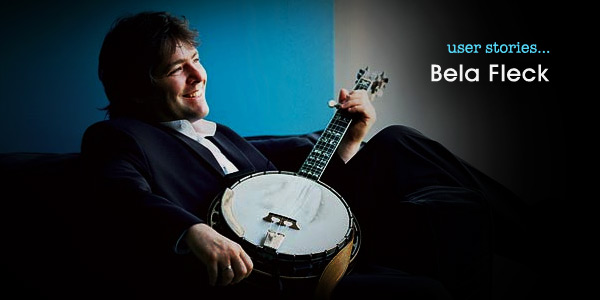 Bela Fleck is often considered the premier banjo player in the world.  A New York City native, he picked up the banjo at age 15 after being awed by the bluegrass music of Flatt & Scruggs.  While still in high school he began experimenting with playing bebop jazz on his banjo, mentored by fellow banjo renegade Tony Trischka. In 1989 he formed the genre-busting Flecktones, with members equally talented and adventurous as himself. As fans ourselves, we were thrilled to learn that he’s added a new dimension to his unique approach to music with Omnisphere.

When composing and arranging the album Fleck told us, “When I asked around about what the coolest soft synth out there was, several trustworthy people pointed me towards Omnisphere. They were right!”

The band has used ’synthy’ sounds in the past Fleck added, “We do a lot of drones that are triggerred by Victor’s feet, or hold pedal stuff with my electric synth banjo. Sometimes Jeff will play some keyboard parts between horn parts. So we were looking for some interesting sounds that tended to change slowly or had a cool vibration or tone to them. In some cases a note might hold for a whole verse or chorus, so we wanted it to add some colour.”

On the Grammy-winning album Hidden Land Fleck triggered the Omnisphere sounds from his MIDI banjo during the recording sessions, “I would play a chord and hit the MIDI hold pedal, then the band would play over that. The Omnisphere drones are so cool, I like the way they change shape and sound, it gives them a lot of color.” Currently back on the road touring, Fleck told us, “I am still looking for a good way to use Omnisphere live. It adds a lot to the songs where we use drones.”

The Flecktones are purveyors of all things technological, Futureman has also extensively used Spectrasonics sound libraries over the years and often creatively utilizes sounds from Heart of Africa in his live solos using his customized “SynthAxe” and Zendrum controllers.