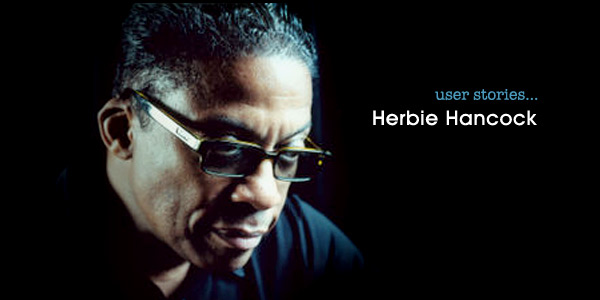 Herbie Hancock is a true icon of modern music. Throughout his explorations, he has transcended limitations and genres while maintaining his unmistakable voice. Simply put, there are few artists in the music industry who have had more influence on acoustic and electronic jazz and R&B music. As a pioneer that has always embraced technology and collaboration, we’re extremely proud that Herbie is a longtime Spectrasonics user.

Discovering Spectrasonics
Herbie told us that when he first got Omnisphere, "I got so inspired by the sounds I would find that hours would go by because I was so inspired and lost in the moment. I called up Marcus Miller and had him come over to jam on some ideas because I was having so much fun. We really had a ball that night!" He says, “I also remember the first time I loaded Stylus RMX, the grooves just knocked me out. Once I started getting on the inside using Chaos and changing the mixes, it was really incredible. There’s such a variety of things you can do, especially with the Time Designer.”

Classic Spectrasonics sample libraries are featured in his arrangements too. “I also use Vocal Planet a lot to get inspired by singers from different cultures. The live surround concerts I did a few years ago featured Vocal Planet. I used the gospel sounds with a modern harmony for background vocals, and the jazz scat singing, the Tuvan singers and the Himalayan female voices,” Herbie said.

Imagining the Possibilities
On the making of his album “Possibilities”, Herbie told us,“I ended up using Stylus RMX, as well as Trilian for bass, on Stevie Wonder’s tune. When they were filming the documentary for the album, Greg Phillinganes and I were playing around with Vocal Planet and Stylus RMX and put together a very funky groove. That moment of creative discovery actually made it into the documentary we filmed about that project.”

For his Grammy-winning, world-influenced "Imagine Project" album, Herbie heavily used Omnisphere and Trilian. "On one song, Marcus Miller recorded a certain bass line. Later on, I changed the bass line and found something else that I wanted to do instead. I played it on a keyboard and I got the sounds from Trilian. But do you know where some of Trilian’s bass samples are from? Marcus Miller. So it was from him originally. In some cases, we mixed the two. Some of them would be done by Marcus live and some would be Marcus as a sample I played on a keyboard. [Laughs.] They’re both him! But he could probably tell the difference."

Music from the Heart
When asked what advice he could you offer to musicians who aspire to create something greater Herbie says, "Music is such a great platform for bringing people together. The main thing is that it’s important to do what’s in your heart, to have the courage to fight for what you believe in and not be swayed by naysayers, even if the naysayer comes from within yourself....So follow your heart!"

Always looking into the future, he added, “I’m looking forward to working just solo with my Korg Oasys and my software instruments; Omnisphere, Trilian and Stylus RMX, it’ll be very exciting.”