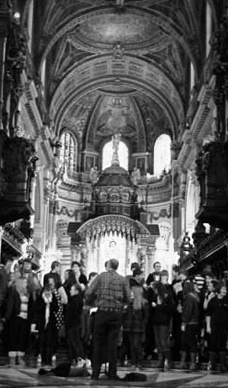 Cantate is widely recognised as one of the UK’s leading youth choirs, with over 100 members who represent over 45 schools mainly in Hertfordshire, Essex and Cambridgeshire. Cantate has appeared on BBC Songs of Praise several times, and has worked and recorded under renown conductors including Sir Andrew Davis and John Rutter.

Cantate has performed at the Royal Albert Hall, the Royal Festival Hall, the Barbican, Guildhall London, 10 Downing Street, St Paul’s Cathedral, the Basilica of St Francis in Assisi, St Mark’s Basilica in Venice, and in many local and regional venues. Cantate has gained many national and international awards. In 2008 they achieved international acclaim at the world’s largest choral event – the World Choir Games in Graz, Austria – in which over 430 choirs from some 90 countries competed.  Cantate won gold and silver medals, and was the only UK choir to win a gold medal in the finals.

Drawing on all its experience since it was founded by Michael Kibblewhite in 1994, Cantate now works actively with other young choirs, sharing its skills and enthusiasm for music-making with the wider community of singers.