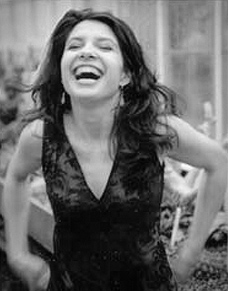 Gina Salá is a vocalist, composer, music director, sound healer, and teacher from Seattle whose love of the human voice has taken her to performing and studying throughout much of the world. She has performed at the US Pentagon, the US Capital, the United Nations, and was principal singer for Cirque du Soleil’s “O”. With a repertoire spanning 23 languages, Gina’s exotic voices are featured on Vocal Planet, recordings by James Twyman, VIP Lounge 2, cds by Tulku, Sonic Tribe, and more.

Gina has lead workshops on voice and healing in the US and Canada since 1995. She is known for facilitating even the most reticent folks to find joyful, embodied freedom in their voices and also to find their own silent voice within. She has worked extensively with youth and adults primarily in the US and Canada. Singing is Gina's path to opening the heart, which brings freedom and ease and joy. Her passion is empowering us to recognize our magnificence through our own voices, and singing us into remembrance of who we are. Jai Ma!