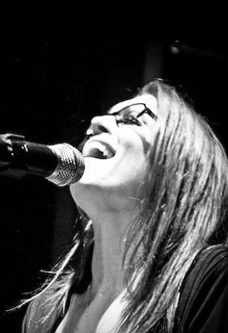 "I feel happiest when I feel like something I gave birth to goes and walks somewhere on its own, hugs someone I like or pursues a perfect stranger."

Kirsten Wenlock is a songwriter, singer, artist and vocal coach from the Pacific Northwest who loves nothing more than to create and listen. She brings her unique brand of soul and feminine sensibility to a long history of projects and performances as a solo artist and collaborator.

Kirsten sang her first national anthem at a Seattle Sonic game at age 6. She and her younger sister Heather quickly became a popular anthem duo in the 1980′s. The Ostrom Sisters traveled extensively and appeared on the David Letterman show, at Seattle stadiums, Olympic exhibitions, The Goodwill Games and The Stanley Cup. In their early teens, the sisters began writing and recording with producer Roby Duke and Eric Persing, releasing their album "Betcha Didn't Know" in 1990. By the time Kirsten was 15, the girls were touring the country with the Katinas, DC Talk and The Newsboys. Wenlock completed her first solo EP “Confessions of a Mad Housewife” (attic edition) in 2009. Elk & Boar, her project with Travis Barker, were featured in Columbia City Theater's “the best of the new” showcase. Her ESPN track "Peyton Dance" features Snoop Dogg and John Legend.

Kirsten lives with her husband James and their three beautiful children in Tacoma - where they have a recording cottage on their property, called Wenlock Studios.