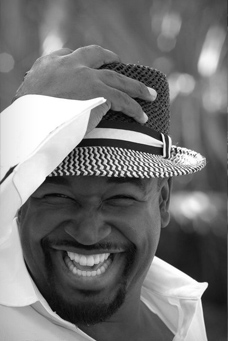 Alvin Chea has been a professional "bass-cat" for 16 years. He has won numerous performance and production awards including seven Grammy awards, five Dove awards, and other industry honors. A pioneer of the bass-vocal "walking" style in a cappella singing, Alvin listened to Marcus Miller, Jimmy Haslip, and Ron Carter mostly in an attempt to mimic what they were doing.

Alvin is well-known as one of the founding members of the acclaimed vocal group Take 6 - that's broken all the rules since 1988 with the debut of their first album recorded a cappella. The band, comprised of 6 principle artists creates modern music influenced by gospel, jazz, doo-wop, R&B, pop, 60's soul and hip-hop. Ten albums, a raft of Grammys, Dove, Soul Train and Down Beat awards later, this group is best loved and best-known by Christian and secular groups as the most talented, surprising and delightful bands today.

Alvin is one of the featured Jazz vocalists on our Vocal Planet collection.