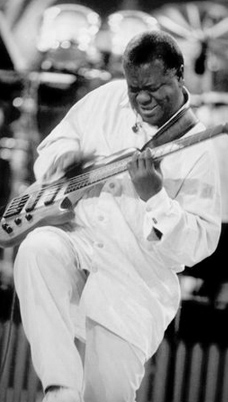 Larry Carlton once said, "There are a lot of great bass players in this world, but there is one, and only one Abraham Laboriel."

This tribute best describes the unique artistry of the Mexico City born virtuoso of the Bass Guitar. To witness Abe play one immediately understands that music is essentially about passion and he is truly one of the most gifted interpreters.

Originally a classically trained guitarist, Abraham infused his flamenco style on the bass guitar when he made the transition to four strings at the Berklee School of Music. Since the day that the late Henry Mancini encouraged him to come to Los Angeles, Abe has played on over 4000(!) recordings and soundtracks, prompting Guitar Player to succinctly peg him as "...the most widely used session bassist of our time." You have undoubtedly heard the diversity of his contributions to recordings by music's creme de la creme including:

It's hard to imagine anyone that embraces the joy of music more than Abraham.