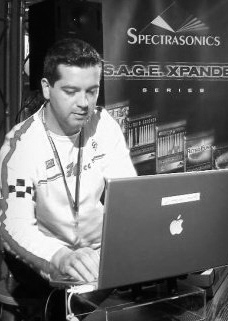 It all started with a D-50 and an explosion of music programming around the planet. Stéphane was one of the first to own this legendary synth in France. His addiction to it and all things audio secured him a position in the dawning of this age of musical programming. Some say he could often be seen programming sounds with his eyes shut in a state of audio nirvana.

It's this kind of passion that keeps Stéphane the eternal optimist in all things pertaining to music and destiny. The allure of the industry eventually lead him to pursue a Masters in Sound Engineering. Studying music arrangement and jazz at the CIM, considered the premiere jazz school in Europe, Stéphane built his skill set through countless studio hours. His talents found their first home in French television work for Les Enfants de la Télé and La Fureur du Samedi Soir.

His association with Spectrasonics spans nearly a decade as a consultant, demonstrator and as a member of the renown sound development team for Omnisphere and Trilian.