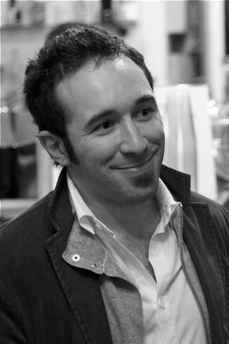 Diego Stocco discovered music at the age of 6 when his parents, hoping to calm him down, gave him his first electronic keyboard. That might have backfired. ;-)

Equal parts sound design artist, composer and performer - Diego creates eclectic musical experiences with custom built instruments and experimental recording techniques. He loves discovering hidden sounds from organic sources, objects and materials, with an unorthodox musical curiosity that allows him to produce music with sounds that have never been heard before.

As a key Producer for Spectrasonics, he's one of our principal creative sound designers. For the epic Omnisphere instrument, he built many custom instruments and created musically playable sounds out of ordinary objects like light bulbs, pieces of furniture, a washing machine, a clothes drying rack, a typewriter, setting a piano on fire and many others imaginative contraptions.

His exploration for new sounds doesn't stop there, Diego has become well-known for extracting evocative sounds from unusual sources for his hugely popular Internet works "Music From Sand", "Music from a Tree" and "Music from a Bonsai" - where he's played organic sounding compositions out of actual trees, sand and compositions performed with his own custom built instruments like the "Experibass" and "Bassoforte". His internet videos of these pieces have gone viral and gained high profile features on CNN and Wired.com

As a composer, Stocco created Epic Score's "Epic Textures" series of libraries which have been licensed for many film trailers, as well as music for video games - including the score for “The Conduit". Thanks to his custom "Experibass", Diego attracted the attention of Oscar® Winner Composer Hans Zimmer - who loved it's pounding tonal grooves and featured him as one of the soloists on his score for "Sherlock Holmes".

Diego is now creating many more imaginary works to unleash upon the world.