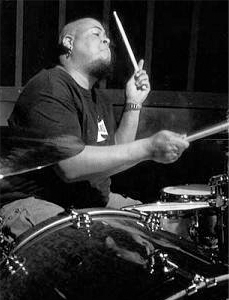 Abe Laboriel Jr. has been banging on objects since before he could walk. He claims that his many failed attempts at melodic instruments have given him an affinity for the simpler arts, such as cooking and drumming.

After a lifetime of learning and absorbing the artistry of some of the world's most respected musicians (including mentors Jeff Porcaro, Chester Thompson and Alex Acuña, as well as his "Bass Legend" father), Abe Jr. has truly come into his own aggressive and commanding style. Today, Abe Jr. is one of the most highly sought after session drummers in the world.