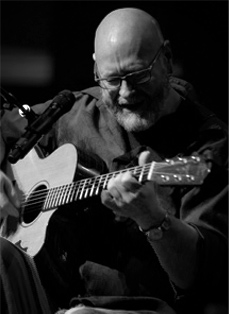 Vocal Planet and Symphony of Voices co-producer Roby Duke was one of the most eclectic and versatile people working in music. He hailed from Mississippi, where he began playing Bass and B-3 in blues clubs with his sax-playing father when he was twelve years old. He was an accomplished guitarist who frequently worked in alternate tunings and developed a unique acoustic technique.

Roby had the rare gift of always bringing out the best in the artists and musicians he worked with. Our Vocal libraries simply would not have been possible without Roby's remarkable skill and ease with people from so many cultures. His love of music translated into over 100 active songwriting copyrights, more than 50 International albums as a producer and arranger, and even more as a vocalist.

As a recording artist, Roby released nine highly respected solo albums, and performed extensively all over the world including Asia, Europe, the UK and Australia. Roby was an early mentor to Spectrasonics founder Eric Persing and the two became very close friends and worked extensively together - producing, arranging and writing many different projects together as collaborators.

In 2007, the world lost a very special man with great ears and a whole lotta soul. We miss you Roby!