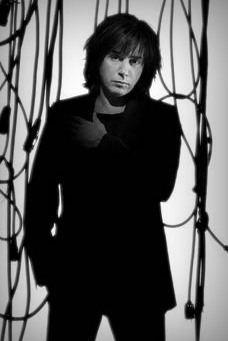 Perhaps it was his early exposure to street performers and jazz musicians. Maybe it was his work with Musique Concrète pioneer Pierre Schaeffer and visual artist Pierre Soulages, or his time with Karlheinz Stockhausen in Cologne. Most likely, it was an amalgam of all of these influences that molded Jean Michel Jarre into the remarkably-innovative composer and showman he is today.

A pioneer himself in the Electronic, Synth Pop, Ambient and New Age genres, Jarre was the first composer to bring electronic music into the Paris Opera House with his opera, AOR. His first 2 albums were recorded in a makeshift studio in his kitchen with two EMS synthesizers and a pair of linked Revox tape machines. For his next album, Oxygène, he added a Mellotron, an ARP2600, and a few others, and it went on to sell an estimated 12 million copies.

In an unparalleled fashion, Jean Michel creates huge outdoor spectacles that feature his music at the center of stunning light shows, laser displays, and fireworks. Holding the world record for the largest-ever audience at an outdoor event, Jarre has brought new meaning to the term, "sold-out!" From the Eiffel Tower and the Great Pyramids to extravaganzas in the Forbidden City and Tian’Anmen Square, Jarre's concerts draw live audiences of as many as 3.5 million. Over 2 BILLION followed his concerts in China on live TV.

Jarre has worked with Arthur C. Clarke, Laurie Anderson, Adrian Belew and fellow Spectrasonics artist, Marcus Miller. He provided original underscore for Jean Chapot’s "Les Granges Brûlées," Mel Gibson's debut, "Gallipoli," and the Kim Basinger's "Nine and a Half Weeks," along with the sound design for Match Télévision and Bang & Olufsen's Concept Store on the Champs-Elysées.

Apart from his musical activities, Jean Michel has led the lobby for Internet copyright legislation before the EU Parliament and is an Ambassador for UNESCO.

JMJ holds a Grammy for Instrumental Album of the Year and the prestigious “Chevalier de la Légion d’Honneur” from the French government. He has sold an estimated 80 million albums and singles.