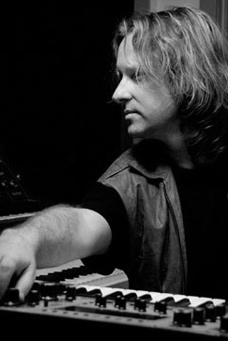 Erik Norlander is a progressive rock keyboardist, composer, and producer from California. Born in Hollywood, he grew up studying jazz and classical music and graduated from college with a degree in English Literature. A self-described prog rocker, Erik is adamant about his preference for melody over flash.

Having written and produced over 30 albums with his chanteuse spouse Lana Lane and his band, Rocket Scientists, Erik's strong and evocative keyboard technique is often compared to the legendary playing of Keith Emerson, Rick Wakeman, and Patrick Moraz.

Erik's expertise with vintage and classic instruments, particularly Moog synthesizers, has led many of today's top synthesizer manufacturers to seek out his sound design talents.

He has worked extensively with The Bob Moog Foundation and performed along with Keith Emerson, opening "The Legacy of Moog" exhibit at The Museum of Making Music in Carlsbad, California, and the epic "Moogus Operandi" concert in Asheville, North Carolina - hometown of the Bob Moog Foundation.

Norlander has been featured in Keyboard Magazine in the US and Japan, along with appearances in Electronic Musician and Japan's venerable rock magazine, Burnn.