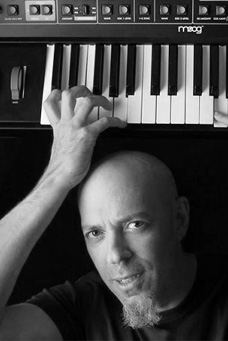 It's not hyperbole to refer to Jordan Rudess as a Renaissance man. A longtime friend of Spectrasonics, this virtuoso keyboardist, software creator, educator, and clinician extraordinaire is apparently hard-wired for musical exploration. At the age of nine, Jordan entered Juilliard for classical piano training and by nineteen, was including synthesizers in his recordings and performances. He was voted Keyboard magazine’s “Best New Talent” in its 1994 readers poll.

An integral member of Dream Theater and before that, the Dixie Dregs, Jordan has shared the stage with Enrique Iglesias, Sting, James Taylor, Elvis Costello and John Legend and with Dream Theater, he's toured the US with Yes and Queensryche. Additionally, Jordan has toured internationally with fellow Spectrasonics contributor and virtuoso keyboardist, Jan Hammer and legendary drummer Tony Williams. He has performed and recorded with David Bowie, the Paul Winter Consort, Tony Levin, Simon Phillips, and Jerry Goodman.

Influenced by pioneering synthesists such as Wendy Carlos, TONTO’s Expanding Head Band, (another obscure Spectrasonics connection!) and Tangerine Dream, it was  ELP's "Tarkus" that really stirred things up for Jordan.The Minimoog wound up being Jordan's first synthesizer after he heard Patrick Moraz (yet another Spectrasonics friend) use that instrument's pitch wheel on recordings by Refugee.

Creator of the iPad sensations, MorphWiz and SampleWiz, Jordan also offers his own brand of music education via his Online Conservatory. His book, "Total Keyboard Wizardry," and Dream Theater's keyboard anthology, are both available through Warner Brothers. His NAMM clinics are not only ubiquitous (!), but highly-anticipated.

Jordan continues to explore new technologies, such as his use of the Haken Audio "fretless keyboard" Continuum. Creator Lippold Haken credits Jordan with important design improvements for this futuristic instrument.

Rudess’ progressive-leaning keyboard compositions and approach may not have been what his mother Rita had envisioned for her son. Jordan relates, "She always says, ‘But you used to play Chopin so beautifully!” Well, Mom, Jordan can now be heard along with Keith Emerson, Rick Wakeman and Patrick Moraz, playing Chopin's Revolutionary Etude on 'Steinway to Heaven,' a Magna Carta release, featuring rock Keyboard virtuosos playing piano classics.