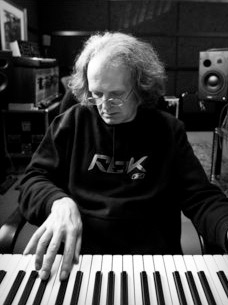 Howard Scarr has spent over three decades living and breathing synthesizers. From ZORCH, the first all-synthesizer band in the UK, to several years immersed in the Electronica scene in Frankfurt, where he also worked with with Jocco Abendroth, "the German Springsteen!"

Following a long stay in Havana with Euro/Cuban project Yocoruba, Howard created some of the most famous Access Virus presets and wrote its highly-acclaimed tutorial. This led to being hired by Access, Roland, NI, Waldorf, Steinberg, U-He and others as a top sound designer.

Scarr has been tapped by Hans Zimmer to provide custom sounds for his scores for the films The Dark Knight, Transformers, Angels and Demons and Inception.

Howard is also a philosopher, as evidenced by the following:

• Your powers of composition are inversely proportional to the quality of your gear
• Think of a sound, any sound. Someone has already used it in a Madonna song
• In the ‘80s, you sold a 303 for $30 and passed up a Minimoog for $200
• The more often your band rehearses, the worse that really important gig will be
• However carefully you open the can of sardines, you will get oil on the keyboard