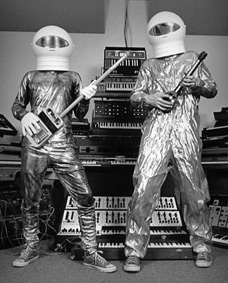 Roger Manning and Brian Kehew met through a classified ad in their local paper - Brian was selling an Optigan (an obsolete, evil instrument). They immediately bonded over their love of Polymoogs, ARP String Ensembles, and Octave CATs (not to mention their old "Switched on Bach" albums).

In the late '80s and early '90s, synthesizers were,  um….very uncool. Brian and Roger spent this period buying the keyboards nobody wanted - not being able to afford them when they were new and hip. This turned out to be pretty good timing.

Brian had always liked to leave annoying, synthy instrumental messages on Roger's answering machine, and Roger would retaliate with threats to record some modern pop songs with their array of old gear. When Roger's girlfriend, Charlotte suggested doing a "modern" Moog album, something clicked and the Moog Cookbook was born.