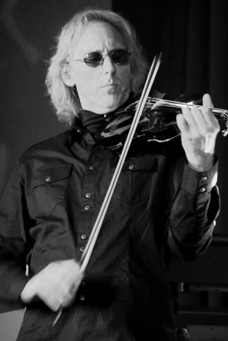 Multi-instrumentalist Eddie Jobson, noted for his trend-setting synth work, is not only an award-winning keyboardist and composer, but his string artisty and wailing solos helped to establish the violin as a legitimate rock instrument.

The progressive musician's musician, Eddie's résumé includes stints with Curved Air, Roxy Music, King Crimson, Frank Zappa, U.K., Procul Harum, the Incredible String Band, Jethro Tull, Yes (you can see him in the video for "Owner of a Lonely Heart"), Joachim Kuhn, and Ryuichi Sakamoto. He appeared on solo albums by members of The Who and Deep Purple, and in his spare time (!) Eddie has written and produced many solo projects.

Alongside his amazing career in prog rock, Eddie has built a successful career as a composer of TV and film soundtracks, including over 100 episodes of Nash Bridges. He also made his mark in advertising, winning a Clio for his score to the Amtrak "California Zephyr" commercial.

Remaining ever eclectic, Eddie produced the album, "Voices of Life," for the Bulgarian Women's Choir. His New-Age electronic album, "Theme of Secrets," was released on Private Music, and he manages his own music label, "Globe Music Media Arts."