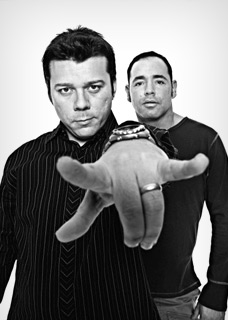 Los Angeles-based electronic duo The Crystal Method have a definite band identity. As opposed to the studio-only anonymity of some techno acts, Ken Jordan and Scott Kirkland are taken seriously as a band, no doubt due to their extensive live performance schedule. As a result of their charismatic stage presence, they enjoy immense popularity in the clubs as well as among radio DJs.

Upon their arrival in California from Las Vegas, they began knocking out tracks inspired by their experiences in L.A.'s underground club scene. On the strength of their demos, The Crystal Method quickly signed a record deal and their debut single, "Keep Hope Alive," was released soon after. The group's debut LP, "Vegas" - an unabashed party record - generated 5 singles and was certified platinum in 2007.

The Crystal Method's music has appeared in numerous films, including "London" and "X Games 3D: The Movie," tons of TV shows and video games (their remix of P.O.D.'s "Boom" appeared in "Amplitude," and a bunch of commercials. Check out their "Drive: Nike + Original Run," written for Nike's series of music designed to be listened to while running.

The Crystal Method are based out of Crystalwerks, their new multi-room studio complex in Los Angeles, and have been nominated twice for Best Electronic/Dance Album.